Skip to content
Jammu and Kashmir National and International Uncategorized 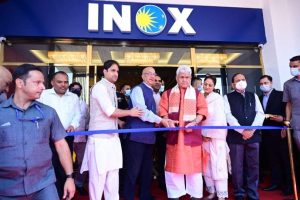 Inaugurating Kashmir’s first multiplex cinema in Srinagar on Tuesday, Jammu and Kashmir’s Lieutenant Governor Manoj Sinha announced that very soon every district of the Union Territory will have 100-seat cinema halls. Addressing a gathering after inaugurating a multiplex cinema in Shivpora area of ​​the city, Lieutenant Governor Manoj Sinha took a dig at Kashmir-centric political parties, saying those who ruled Jammu and Kashmir for years, did so for their entertainment. They used to go outside Jammu and Kashmir and even abroad while all the means of entertainment for the general public remained closed here.

The Lieutenant Governor said that cinema lovers are everywhere in Kashmir. The valley has a great history of cinemas. “There was a time when a large number of people used to come to watch movies with friends and families. In the times to come, this cinema will provide them an opportunity to think big and dream big apart from entertainment. Referring to a Bollywood blockbuster film Beast, the Lieutenant Governor said that in the year 1965 this film starring famous Bollywood actor Shami Kapoor was screened in Broadway cinema. Such was Shammi Kapoor’s love for Kashmir that he had asked his family members to immerse the ashes in the Dal Lake in Srinagar.

He said that Kashmiri people have been deprived of entertainment for the last three decades. The first multiplex opened here today will prove to be the main source of entertainment for the people of Cinema Valley. He announced that two multi-purpose cinema halls in Pulwama and Shopian districts are also coming up soon. Not only this, we are planning to set up 100 seater cinema halls in every district of Jammu and Kashmir.

Sinha said Srinagar was once a center of entertainment. There were about eight major theaters in this district – Palladium, Regal, Shiraz, Neelam, Khayyam, Broadway, Naaz and Firdous. With this multiplex cinema, today we are trying to bring back the lost era. This open cinema in Kashmir shows the changing picture of the plaintiff.

The LG said that 5th August 2019 was a historic day when the Indian Parliament took a major decision. The government of Delhi is not trying to buy peace in Jammu and Kashmir, but is trying to establish it permanently. Speaking about the new film policy, Lt Governor Sinha said that recently a lot of films were shot in Kashmir. Many are in the pipeline. Soon we will also set up a film city in Kashmir. We are also giving a lot of incentives to young filmmakers under the new film policy so that local employment can be created.