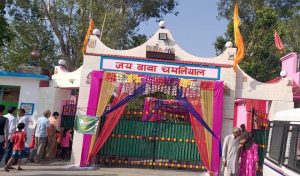 At the same time, the ritual of offering chadar was performed by the youth club of the local Dag Chhani Fatwal at seven in the morning. People have started coming to Baba’s tomb since morning. There was a lot of enthusiasm among those who bowed their heads at the dargah. The fair could not be held for two years due to the restrictions of the Corona epidemic. Therefore, this time Baba Chamliyal’s tomb in Ramgarh of Samba district is witnessing double the arrangements.
This shrine on the India-Pakistan zero line border in Dag, a border village of Ramgarh area of ​​Samba, belongs to Hindu Rajput Baba Dalip Singh Manhas, but there is no scope of religion among those who consider it as Muqaddas. 300 years ago, Baba Dalip Singh Manhas, who became every heart Aziz by relieving common people from skin diseases, is called Baba Chamliyal.