“There has been a slight increase in the number of people joining terrorist ranks in comparison to 2019. However, the positive aspect is that 70 per cent of them were either eliminated or arrested. The shelf life of terrorists has decreased,” Singh said. 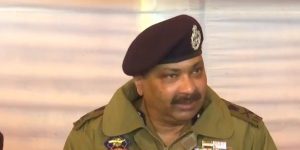 He added that there has been a significant decline in terrorist-related incidents this year in comparison to 2018 and 2019.

“There were a dozen terrorists active in the Jammu region, the number has reduced to three now. They are in Kishtwar district, we are tracking them,” Singh said.

The J&K DGP further said that despite several attempts by Pakistan, cases of infiltration this year is lowest in the last three-four years.

“So, they (Pakistan) had to rely on local recruits and they tried to supply weapons, explosive materials and cash to them through drones, most of these were foiled,” he said.

His statement comes a day after three allged terrorists were killed in an ecnounter in Parimpora area of Srinagar.

Families of the slain youths said they had no connection with militancy and that two of them were students.

While one militant was killed in the early hours of Wednesday, two others were shot dead a few hours later, a police spokesman said.

The families from south Kashmir’s Pulwama and Shopian districts also staged a protest outside the police control room here and claimed that of those killed, one was a Class 11 student, one a university student and the other a carpenter.

Referring to the claims made by the families, he said, “Generally parents don’t have idea about the activities of their wards. Several OGWs (overground workers) after committing terror crimes like grenade throwing and shooting, among others, stay normally with their family.” Though the three killed terrorists “were not mentioned in our list of terrorists, yet two of them are hardcore associates of terrorists (OGWs)”, the spokesman said, adding that of the two, one was a relative of top Hizbul Mujahideen commander Rayees Kachroo, who was killed in 2017.

He said it is suspected that the third might have joined militant ranks very recently. The spokesman said police is investigating the case and after a “thorough probe, will come to a conclusion on merits”.

The three militants were killed in the overnight encounter in the Parimpora area of the city. Militants had opened fire on security forces during a cordon and search operation on Tuesday evening, he said.