Former minister and president of Apni Party (AP) Syed Mohammad Altaf Bukhari on Thursday urged the administration to clear the misgivings about the Hokarsar encounter in which three youths were killed by the security forces on Wednesday.

Security forces claimed to have killed three local militants in an encounter at Hokarsar in the city outskirts while the family members refuted the claim and said all the three were innocents. 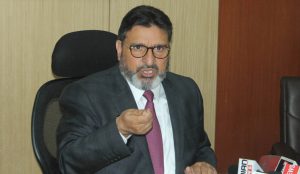 In a statement here this afternoon Bukhari expressed deep concern over the family inputs of three slain youth that have created misgivings about the veracity of Hokersar-Srinagar encounter.

Bukhari demanded that the J&K government should clear the facts about the credentials of the three slain youth while taking into consideration the testimonials given by their respective families.

“The version of families of the slain trio is contradictory to what the army and the police claim about the Hokersar encounter. So the government must clear the air and remove the misgivings about the same,” he demanded.