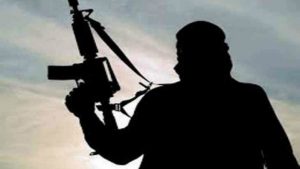 Police and security forces have claimed to have caught a hybrid terrorist in Bandipora district of Kashmir division. Police said that the terrorist Mehboob-ul-Inam is associated with the banned terrorist organization Lashkar-e-Taiba and weapons have also been recovered from him.
According to the information received from the police, the police and security forces had put up a naka near the checkpoint at Papchan in Bandipora. During the investigation here, he arrested Mehboob-ul-Inam, a terrorist associated with Lashkar-e-Taiba. Police have recovered incriminating material including three one rifles, 10 magazines, 380 rounds, two kg IED, one Chinese grenade from him. The police have registered the case and started further investigation.