An emotional President-elect Joe Biden flew to Washington Tuesday on the eve of his inauguration, as his predecessor Donald Trump — who will snub Biden’s swearing-in — for the first time wished success to the new administration.
Tears rolled down Biden’s cheeks at a farewell ceremony in his hometown of Wilmington, Delaware, where he paid tribute to his late son and rising politician Beau, before catching a plane to the capital.

“Excuse the emotion, but when I die, Delaware will be written on my heart,” Biden said. “I only have one regret, that he’s not here, because we should be introducing him as president.”

Trump, who has not appeared in public for a week, broke days of silence with a videoed farewell address which the White House said would be released later in the day.

According to excerpts, Trump for the first time asked Americans to “pray” for the success of the incoming Biden administration — a change of tune from weeks spent persuading his huge number of Republican followers that the Democrat cheated in their election battle. 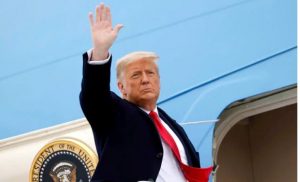 Trump has yet to personally congratulate Biden on his win or invite him for the customary cup of tea in the Oval Office.

In one of his last acts before he flies to Florida from Joint Base Andrews on Wednesday morning, Trump is expected to issue scores of pardons, with speculation rife over who might make the list.

The latest indications are that Trump will not take the legally dubious step of issuing himself and his children preemptive pardons.

Outside the White House fence, central Washington has taken on a dystopian look ahead of Biden’s inauguration, swarming with National Guard troops and largely emptied of ordinary people.

Covid-19 restrictions meant the swearing-in ceremony at noon on Wednesday was always due to be sparsely attended. But fears of right-wing attacks in the wake of the pro-Trump riot in the Capitol building on January 6 have triggered unprecedented deployments of armed soldiers, concrete barriers and secure areas dubbed “green” and “red” zones.

Adding to the tension, the Senate is expected to put Trump on trial soon, following his record second impeachment by the House of Representatives over the Capitol riot.

Biden, a veteran Democratic senator who also served as vice president to Barack Obama, left for Washington with his wife Jill Biden.

Together with incoming vice president Kamala Harris — the first woman ever to hold the job — Biden was due to deliver a Tuesday evening address on the Covid-19 crisis, from the Lincoln Memorial Reflecting Pool.

This will give the incoming president and vice president a first glimpse of a city transformed for their inauguration.

The grassy Mall area, barred to the public, has been filled with some 200,000 American flags to represent the people who at any other inauguration would have come to witness history. Fifty six pillars of light will beam up to represent the 50 US states and territories.