A global team of researchers arrived Thursday in the Chinese city where the coronavirus pandemic was first detected to conduct a politically sensitive investigation into its origins amid uncertainty about whether Beijing might try to prevent embarrassing discoveries. 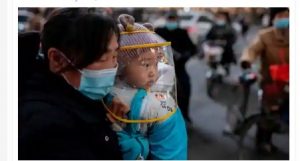 The 10-member team sent to Wuhan by the World Health Organization was approved by President Xi Jinping’s government after months of diplomatic wrangling that prompted an unusual public complaint by the head of the WHO. They arrived Thursday, state media CGTN reported on Thursday.

Scientists suspect the virus that has killed 1.9 million people since late 2019 jumped to humans from bats or other animals, most likely in China’s southwest. The ruling Communist Party, stung by complaints it allowed the disease to spread, says the virus came from abroad, possibly on imported seafood, but scientists reject that.

The WHO team includes virus and other experts from the United States, Australia, Germany, Japan, Britain, Russia, the Netherlands, Qatar and Vietnam.

A government spokesman said this week they will “exchange views” with Chinese scientists but gave no indication whether they would be allowed to gather evidence.