Bhupinder Singh Mann, one of four experts nominated by the Supreme Court for negotiations with farmers protesting against the farm laws, withdraw his name from the panel on Thursday. 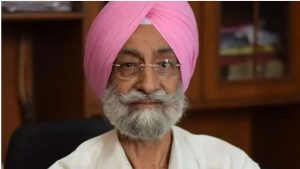 Mann quit the panel saying he wanted to remain impartial and due to public sentiment in connection with the farmers’ ongoing protest.

Recusing himself from the Farm Laws Committee constituted by the Supreme Court, Mann said, “While I am thankful to Hon’ble Supreme Court of India for nominating me in the 4 member committee to start a dialogue with Kisan Unions on the three laws brought in by the Central Government. As a farmer myself and a Union leader, in view of the prevailing sentiments and apprehensions amongst the farm unions and the public in general, I am ready to sacrifice any position offered or given to me so as to not compromise the interests of Punjab and farmers of the country, I am recusing myself from the Committee and I will always stand with my farmers and Punjab.”

The Supreme Court had on Tuesday also stayed the implementation of the three controversial farm laws besides forming a four-member committee to take over negotiations with the farmers on the impact of these laws.

On Monday, the top court had indicated that it may appoint a retired Chief Justice on the committee and asked the parties involved in the matter to suggest few names. Chief Justice SA Bobde disclosed that he had asked former Chief Justice P Sathasivam but he was reluctant since he doesn`t understand Hindi. Former Chief Justice R M Lodha`s name was also suggested during the hearing.
However, on Tuesday, the Chief Justice named four agriculturists to the panel: Ashok Gulati, agricultural economist; Bhupinder Singh Mann, President, Bhartiya Kisan Uniom-Mann; Anil Ghanwat, President, Shetkari Sangathan; and Pramod Kumar Joshi, International Food Policy Research Institute.

None of these members was part of the hearing on farm laws in the apex court, especially in the past two days, when a bench headed by the Chief Justice made several critical observations against the government on these laws. The bench also cited that the government had failed to develop a consensus before passing the laws.

But there seems to be a roadblock. It has been widely reported that members of the committee favour the farm laws. Against this backdrop, the farmers` unions have said that this committee is not a solution.

For instance, Gulati, for instance, has put his weight behind the farm laws and compared them to the 1991 economic reforms. Mann, who heads his own faction of BKU, has also come out in support of farm laws. In December, he had met Agriculture Minister Narendra Singh Tomar and expressed his support for the new farm laws.

Ghanwat, who heads the Maharashtra based Shetkari Sanghatana, has spoken against the demand for repealing the farm laws. He had also told the media that the APMC and MSP systems will continue, therefore there is no reason for agitation. Joshi had written an article in a leading financial daily, where he had said it is unfortunate that farmers are changing the goalposts before every negotiation.

The Supreme Court has tasked the committee to hear the government as well as the representatives of the farmers` bodies, and other stakeholders, and submit a report to the court containing its recommendations. “This shall be done within two months from the date of its first sitting. The first sitting shall be held within ten days from today,” said the top court in its order.