The Supreme Court on Tuesday stayed the implementation of the three farm laws until further orders. Pronouncing the order, the top court also said it has formed a four-member committee to hold talks. During the hearing, the Supreme Court today initially said that it is planning to suspend the new farm laws, but not indefinitely. Chief Justice of India (CJI) Sharad Arvind Bobde said the apex court is also forming a committee to get a clearer picture of the three farm laws. The batch of petitions, including those filed by DMK MP Tiruchi Siva, RJD MP Manoj K Jha, regarding the constitutional validity of three farm laws, passed by the Central government, and the plea to disperse protesting farmers was being heard by a three-judge bench, headed by the CJI.

“We are forming a committee so that we have a clearer picture. We don’t want to hear arguments that farmers will not go to the committee. We are looking to solve the problem. If you (farmers) want to agitate indefinitely, you can do so,” CJI Bobde said. 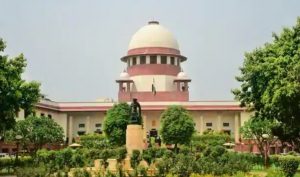 “We are concerned about the validity of the laws and also about protecting the life and property of citizens affected by protests. We are trying to solve the problem in accordance with the powers we have. One of the powers we have is to suspend the legislation and make a committee,” he said.

“This committee will be for us. All of you people who are expected to solve the issue will go before this committee. It will not pass an order or punish you, it will only submit a report to us… The committee is part of the judicial process in this case. We are planning to suspend the laws but not indefinitely,” he added.

Advocate ML Sharma, who filed a plea challenging the farm laws, told the apex court that farmers have said they will not appear before any committee to be constituted by the court.

Sharma pointed out that farmers have said that though many people came for discussions, the prime minister did not.

The CJI replied: “We cannot ask the prime minister to go. He is not a party in the case.”

No power can prevent us from setting up panel to resolve impasse on farm laws, says SC
Seeking cooperation of protesting farmers at Delhi borders, the Supreme Court today said no power can prevent it from setting up a committee to resolve the impasse over controversial farm laws. The observation of the bench asking protesting farmers bodies to cooperate assumes significance in view of reports that they would not go to any apex court-appointed panel for resolution of disputes and wanted repeal of laws only.

Before pronouncing the order, the bench headed by Chief Justice SA Bobde commenced the hearing and urged the farmers’ unions to cooperate and go before the committee to be appointed by it to resolve the dispute.

In the proceedings conducted through video conferencing, it said no power can prevent us from making committee to resolve the impasse on new farm laws.

It reiterated the apex court has powers to suspend the legislation in order to solve the problem.

The bench said those who “genuinely want resolution, will go to the committee” on farm laws.

It highlighted the difference between judiciary and the politics and asked the farmers to cooperate with it.

“This is not politics. There is a difference between politics and judiciary and you will have to cooperate”, it said to farmer unions.

SC issues notice on Delhi Police’s application seeking to stop tractor rally
The Supreme Court has also issued a notice on the Delhi Police’s application seeking to stop the proposed tractor rally on Republic Day by farmers protesting against the new farm laws. Attorney General KK Venugopal said that if these farmers are allowed to enter, then no one can say, where they will go. To this, the CJI replied, “The police is with you (government)… Entry to the city will be a decision of the police.”

The Attorney General said that there is no question of a huge group of one lakh people entering the city on Republic Day.

“We can’t say where they all will go,” he said.

The CJI said it is within police powers to control that and check if they are armed. The CJI also asked Attorney General, “If there is an infiltration by a banned organisation and somebody is making an allegation here before us, you have to confirm it. File an affidavit by tomorrow.”

The AG responded by saying that he will file an affidavit in this regard and place the IB records.

The Attorney General said the protesters have said that the tractor rally will take place on Republic Day and therefore an injunction application has been filed by Delhi police to stop that.

On Monday, the apex court had pulled up the Centre for its handling of the farmers protest against the new farm laws saying it is “extremely disappointed” with the way negotiations between them were going and it will constitute a committee headed by a former Chief Justice of India to resolve the impasse.

Farmers have been protesting at different borders of the national capital since November 26, 2020, against the three newly enacted farm laws – Farmers’ Produce Trade and Commerce (Promotion and Facilitation) Act, 2020, the Farmers (Empowerment and Protection) Agreement on Price Assurance and Farm Services Act, 2020, and the Essential Commodities (Amendment) Act, 2020.

If the Centre does not want to stay the implementation of the farm laws, the Supreme Court on Monday had said it will put a stay on it.