Another feather and another year is added to the milestone that this legend has set in Indian cricket. The cricket fraternity and the entire nation wishes their ‘hero’ Kapil Dev as he turns 62 today. Pacey fast-medium bowler, aggressive with the bat, an epitome of a classic all-rounder and a highly admirable leader, Kapil Dev will always be commemorated as the captain who lead Team India to lift the cricket World Cup in 1983.

The all-rounder had a lethal outswing and an energetic action that took the ball away from every right-handed batsman he has faced whereas with the bat, a lower-middle order aggressive batsman who smashed boundaries is fondly known for changing the momentum in high-pressure matches. He was the first player to do the all-rounder’s double of 100 wickets and 1000 runs just at the age of 21. 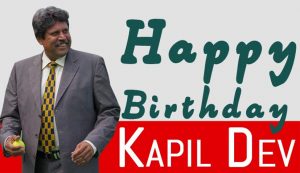 Since his debut in 1978, there has been no turning back. The charismatic and dynamic all-rounder was lively in Test cricket as he wasn’t afraid to loft the ball onto the inbounds. Kapil became the Indian captain in 1982 after he replaced the original ‘master blaster’ Sunil Gavaskar to lead India in the 1983 World Cup.

The industrious all-rounder had smashed 8 tons and 27 half-centuries with the bat and collected 424 wickets in Test cricket. His best bowling figures till date has been 9/83 where as his career highest with the bat has been 163. The right-handed batsman and fast-medium bowler was recognised for his performances in the longest format of the game as his ODI achievements have been ordinary as he has only hit one century and collected 253 wickets in the 225 One Day Internationals he has played.