Advocate Deepika Singh Rajawat, who represented the Kathua gangrape victim in 2018, was on Sunday booked by the Jammu and Kashmir Police for allegedly hurting the religious sentiments of a community in one of her tweets.

A police officer confirmed the registration of the FIR in the matter, saying that this has been done following complaints from different people. 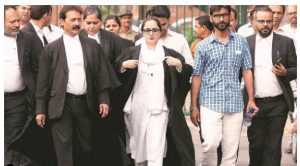 Sources said Rajawat has been booked under provisions of Sections 295A and 505 (b) (2) of the Indian Penal Code, which deal with creating enmity and hatred between different classes of people and making malicious report or content with an intention to cause alarm or induce a personal attack and damage public property, besides injuring religious sentiments.

On Tuesday, Rajawat had tweeted a cartoon making a point about women’s safety featuring Goddess Durga, which had sparked outrage online.

The offences levelled in the FIR are non-bailable. The police said they are waiting for a report by the Cyber Cell about the origin of the tweet, among other things, before initiating action against the lawyer.

Earlier, Bajrang Dal activists led by Rakesh Bajrangi had held a demonstration outside Rajawat’s residence and demanded action in the matter. They had also lodged a formal complaint against her with the police.

Rajawat dismissed the FIR as “a fractured piece which will not survive in the court”, adding that it was registered by way of “sheer abuse of law and under pressure from BJP and other saffron organisations”.

Pointing out that her tweet meant to send a message about women’s safety, she said that in the FIR, she has been charged with offences which she did not commit.