US Secretary of State Mike Pompeo and Secretary of Defence Mark T Esper are on their way to New Delhi for the third edition of the 2+2 talks with their Indian counterparts, Foreign Minister S Jaishankar and Defence Minister Rajnath Singh. The dialogues come eight months after US President Donald Trump’s visit to India and days before the country’s presidential election.
Ahead of the important talks, the US State Department said the country welcomes India’s emergence as a leading regional and global power. “As outlined in our National Security Strategy, the United States welcomes India’s emergence as a leading regional and global power. The United States looks forward to collaborating closely with India during its upcoming term on the UN Security Council,” the US said.

Mr Pompeo’s visit marks the fourth visit to India by a Secretary of State during the Trump Administration. 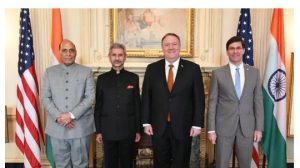 “Wheels up for my trip to India, Sri Lanka, Maldives, and Indonesia. Grateful for the opportunity to connect with our partners to promote a shared vision for a free and open IndoPacific composed of independent, strong, and prosperous nations, ” he tweeted last night.

The top US leaders will also meet Prime Minister Narendra Modi and hold discussions with other government and business leaders on ways to advance the US-India Comprehensive Global Strategic Partnership, the State Department said.

On the agenda for the 2+2 foreign and defence minister-level talks, the US said the subjects to be covered included regional security cooperation, defence information sharing, military-to-military interactions and defence trade.

“We have made significant progress towards concluding the last foundational defence enabling agreement – the Exchange and Cooperation Agreement or BECA,” senior officials of the Trump administration said last week in an online news briefing.

“This agreement will allow for expanded geospatial information sharing between our armed forces. We are also seeking to expand secure communication capabilities between our respective militaries as well as between our foreign defence ministries and that figures prominently in what we are trying to accomplish in the information-sharing space,” they added.

There is a broad understanding that during the 2+2 talks, New Delhi and Washington may close-out signing BECA after years of negotiation. The signing of the agreement would allow the US to share precision satellite and topographical data from its constellation of military satellites on a real time basis.

Last week, the US also said it is watching the India-China standoff in Ladakh closely, sharing information with New Delhi, and wants to ensure the situation does not escalate.

The recent Quadrilateral Ministerial meeting in Tokyo convened by Mr Pompeo and his counterparts from India, Japan, and Australia, the US said, demonstrated the strong cooperative ties among Indo-Pacific democracies interested in strengthening a rules-based order in which all nations are sovereign, strong, and prosperous.