The upcoming Rs.58.23 Crore mega-sports complex is going to be spread over 270 kanals of land, being undertaken under the Prime Minister’s Development Package (PMDP) and it will go a long way in accentuating the overall Sports Infrastructure in the Union Territory. This will be one of the best and State of Art Sports Complex having multiple Sports facilities of International/National standards in one place. Falling in close vicinity of national highway 44, the project shall not only cater to the Hiranagar area but the whole of J&K and would be an important place for hosting National and International events. 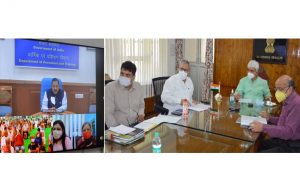 Remembering Sh. Arun Jaitley, the Lt Governor said that he was an outstanding parliamentarian, a legal stalwart, an eminent intellectual, an able administrator, and an immaculate statesman who believed in the high ideals of transparency and accountability in governance. Sh. Arun Jaitley’s contribution to nation-building and his role in Indian polity has been exceptional, he added.

Family members of Sh Arun Jaitley, including his wife Smt. Sangeeta Jaitley, and his daughter also participated in the event through the online mode.

The Lt Governor remarked that the government of India is very keen to provide the basic necessary infrastructure for promoting sports culture in J&K and the region has been privileged to get Rs.200Crore under PMDP for developing sports infrastructure. Out of 22 sanctioned sports complexes, eight have already been dedicated to the public and efforts are being made for speedy completion of the remaining, announced the Lt Governor.

In this respect, the Lt Governor also lauded the efforts being made by the Union Government for the promotion of sports activities nationwide.

‘Treading the part of accountability and transparency as shown by Sh. Arun Jaitley, the UT administration has recently launched online Grievance Redressal System-JKIGRAMS, through which any citizen of J&K would be able to file his grievance with the UT administration for prompt and speedy disposal’, said the Lt Governor. This perhaps would be a befitting tribute to the leader of impeccable integrity, he maintained.

The Lt Governor observed that there is no dearth of talent in J&K and that the same shall be identified and nurtured by proper training and infrastructure. ‘With enough training, the J&K youth would easily prove their mettle at any forum’, he said.

On the occasion, the Lt Governor also remembered his life long association with the great leader and acknowledged his unwavering support to him all along.

Dr. Jitendra Singh, Union Minister, during his address, outlined that the Mega Sports Complex is a tribute to the Late Sh. Arun Jaitley; fulfilling the long pending demand of the public of the area. Sh. Kiren Rijiju, Union Minister of Youth and Sports remarked that the Union Ministry is committed to augmenting the overall sports scenario in the region and will extend full support for the same.